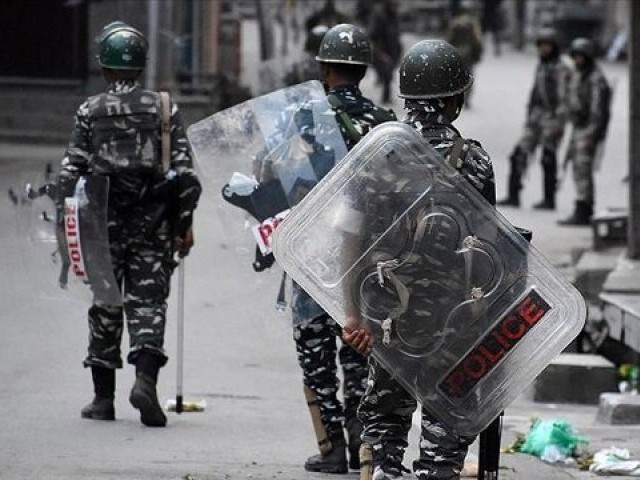 ISLAMABAD: Pakistan on Thursday condemned what it known as “a fake encounter” during which a senior commander of Kashmir’s indigenous resistance motion – Hizbul Mujahideen – was killed by the Indian occupation forces in held Kashmir (IOJ&Ok).

In accordance with an Indian official, occupation troops launched an operation late on Tuesday after receiving intelligence that Hizbul Mujahideen commander Riyaz Naikoo was hiding in a village in Pulwama district. They claimed they later killed Naikoo together with three others in a gunbattle.

With out explicitly mentioning the killing of Naikoo, the Overseas Workplace spokesperson on Thursday expressed grave issues over the “brutal military crackdown by Indian occupation forces.”

“It is a matter of grave concern that the situation in Indian occupied Jammu and Kashmir (IOJ&K) continues to deteriorate due to the brutal military crackdown by Indian occupied forces,” Aisha Farooqui advised reporters on the weekly information briefing by way of a video hyperlink.

“Despite the surge in COVID-19 cases in the IOJ&K, Indian occupation forces continue their relentless campaign of oppression and brutalization of the Kashmiri people. Innocent Kashmiris are being martyred in fake encounters and phony cordon-and-search operations,” the spokesperson stated.

“In an inhuman observe, even the mortal stays of these martyred aren’t being handed over to the households. Hundreds of Kashmiri males, girls and kids are taking to the streets to protest towards Indian brutalities and to let the world neighborhood know that they reject unlawful Indian occupation.

“There are reports of Indian security forces firing pellet guns and live bullets on peaceful protesters, killing at least one innocent Kashmiri and wounding scores of others. These Indian actions are highly condemnable,” the spokesperson added.

Aisha stated India should understand that it can not break the need of the Kashmir individuals and suppress their indigenous resistance motion by way of using drive.  The intensified resistance in IOJ&Ok, she stated, is a direct consequence of Indian marketing campaign of oppression and brutalization of Kashmiris.

“We also categorically reject, once again, the baseless Indian allegations of ‘Infiltration’, which are designed to divert attention from India’s grave human rights violations in IOJ&K and to create a pretext for “false flag” operation,” Aisha added.

Whereas sensitizing the worldwide neighborhood about such a risk, Pakistan constantly urge India to chorus from any ill-considered and irresponsible transfer which may have severe implications for peace and safety within the area.

“We as soon as once more name upon the worldwide neighborhood to take discover of the state of affairs and maintain India accountable for its unlawful actions, that are imperiling peace and stability in South Asia.

“We also urge the world community to work for ensuring the peaceful resolution of the Jammu and Kashmir dispute in accordance with the United Nations Security Council (UNSC) resolutions and the wishes of the Kashmiri people,” she added.

One killed, three injured by cops in Faisalabad

Efforts to supply employment to the youth of...